Think VR goggles are only for gamers? Think again.

Attendees at Hacking the Human: Digital Healthcare Solutions, an event hosted Friday by ASU’s Health Entrepreneur Accelerator Lab (HEALab) in downtown Phoenix, got to see firsthand how the hardware typically relegated to the entertainment industry is finding a home in the health care sector as a tool for diagnosing, tracking and treating neurological disorders.

VR and other health innovations — including virtual doctor visits, mobile metabolic apps and smart textiles — were on display to a crowd of more than 700 students, faculty and community members at the daylong event that included tech demos and speaker sessions and culminated in the College of Nursing and Health Innovations’ undergraduate Health Innovation Exposition. 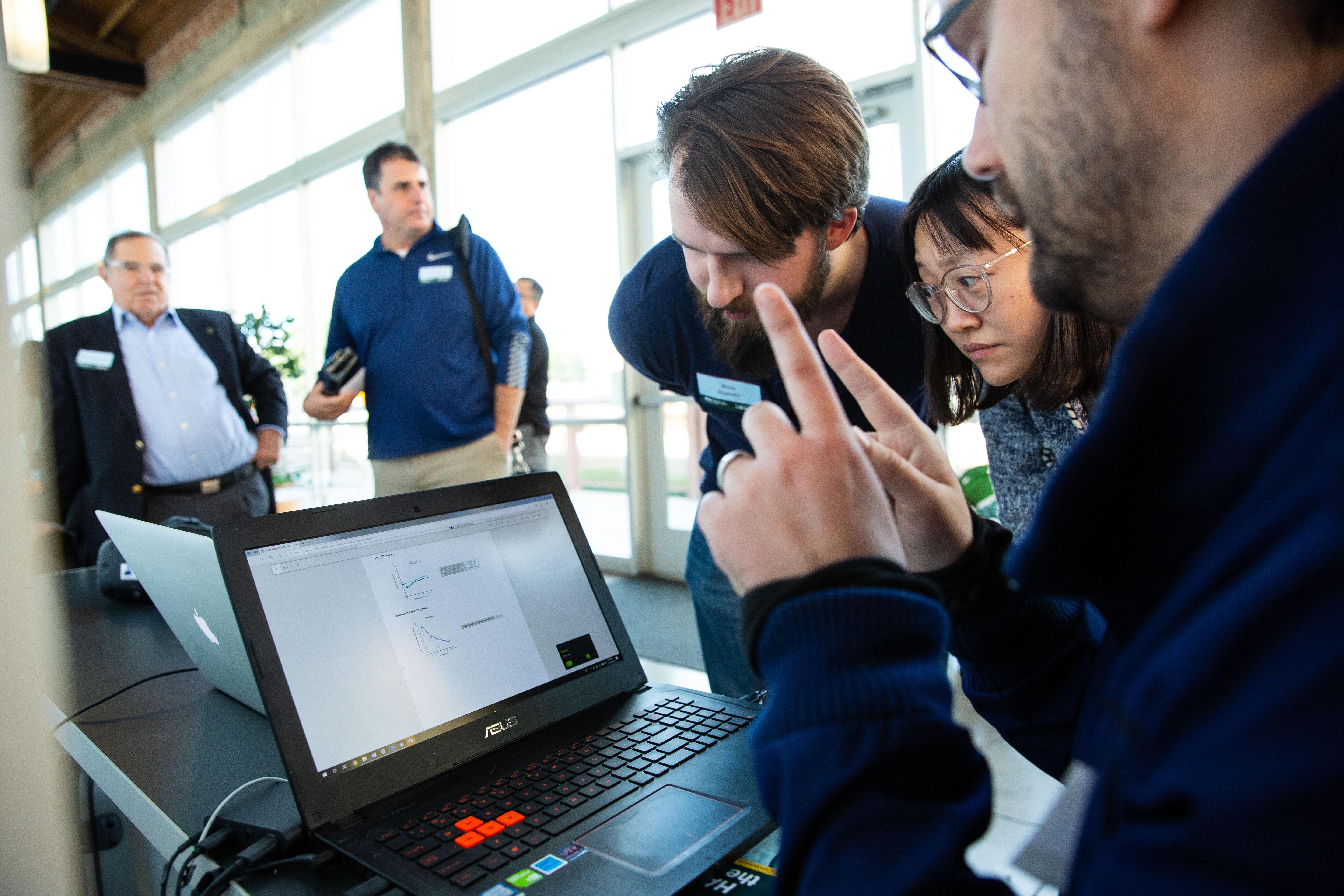 “We’re located in the heart of Phoenix, which is developing a strong ecosystem for health innovation,” said HEALab director Rick Hall, noting that health care heavyweights such as Mayo Clinic, Translational Genomics Research Institute (TGen) and the Barrow Neurological Institute are all just a relative stone’s throw away from ASU’s Downtown Phoenix campus.

According to Vice President of Emerging Technologies for the Greater Phoenix Economic Council Darryn Jones, roughly $3 billion is being invested in the region in the health care space.

At Friday’s event, students and community members presented original products and ideas they were able to get off the ground with the help of funding and mentorship from ASU entities like HEALab, Venture Devils and SkySong Innovations.

Nutrition major Erin Washbon’s interactive website Dashboard Kitchen aims to help individuals struggling to make lifestyle changes due to metabolic disorders like diabetes. She said the assistance she received from ASU in the form of both funding and guidance was “invaluable,” enabling her to not just start a business but gain the confidence needed to grow and maintain it.

“We’re number one in innovation for a reason,” said nutrition senior Nico De Bruyn, whose outdoor adventure app PakPak encourages physical activity by connecting people locally who are interested in activities like hiking, canoeing or yoga in the park.

“ASU has the kind of mentors and individuals who are willing to propel us forward,” he added. 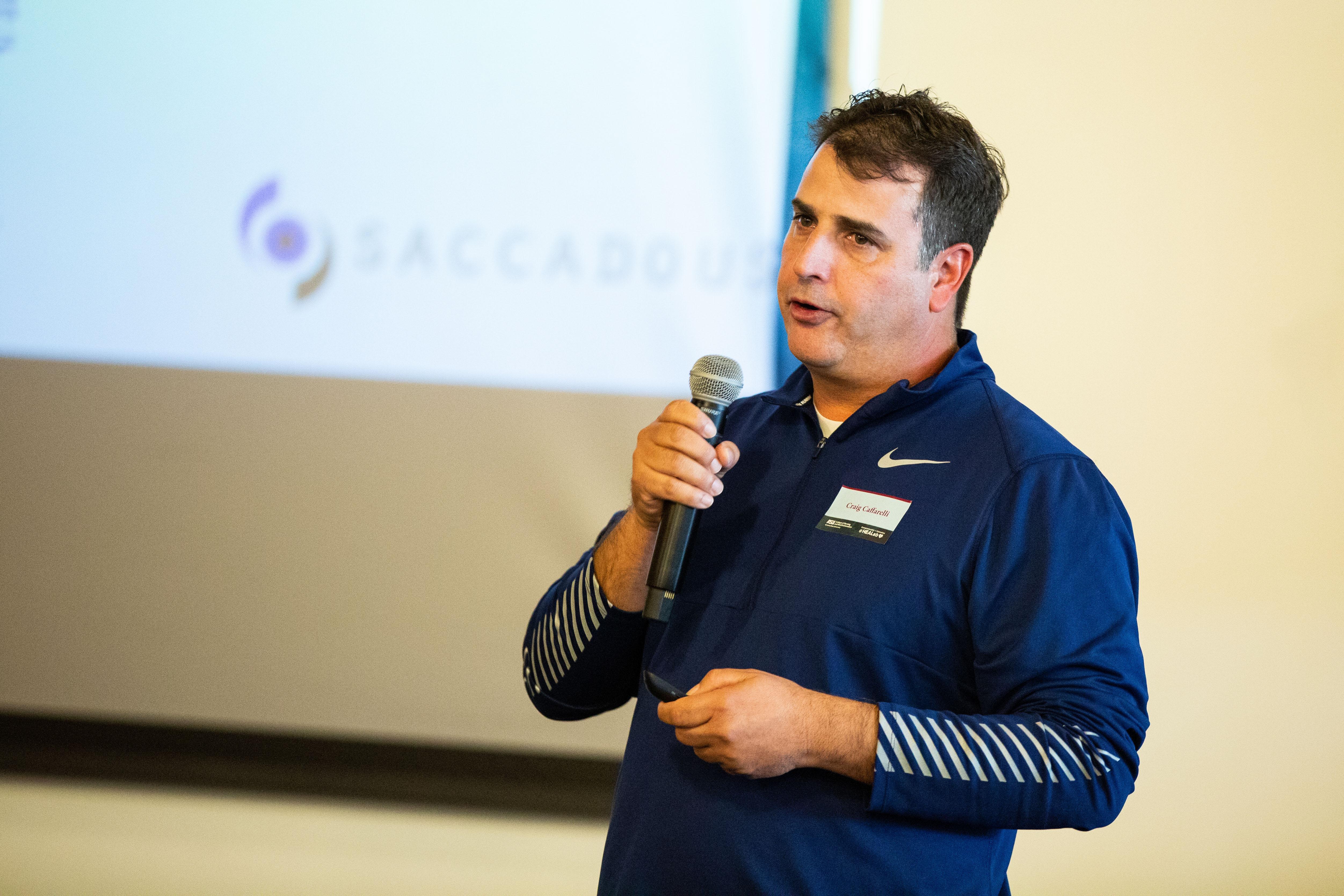 Co-founder and President of Saccadous Craig Caffarelli introduces the company’s eye-movement tracking technology during the Hacking the Human conference on Nov. 30. Photo by Deanna Dent/ASU Now

Saccadous CEO Craig Caffarelli got his company — which uses a VR headset to detect voluntary and involuntary eye movement — off the ground with the help of SkySong. Aside from diagnosing neurological disorders, the technology can also be used for such purposes as tracking the recovery of athletes who have suffered head trauma or assessing the efficacy of ADHD treatment.

“We wouldn’t be here without ASU,” Caffarelli said.

The same is true for James Bates and his company AdviNOW, an AI-powered automated health care system that just announced a partnership with Safeway. AdviNOW allows doctors to automate repetitive tasks like billing, taking vitals and dispensing discharge orders so they can see more patients while also spending more time with them. 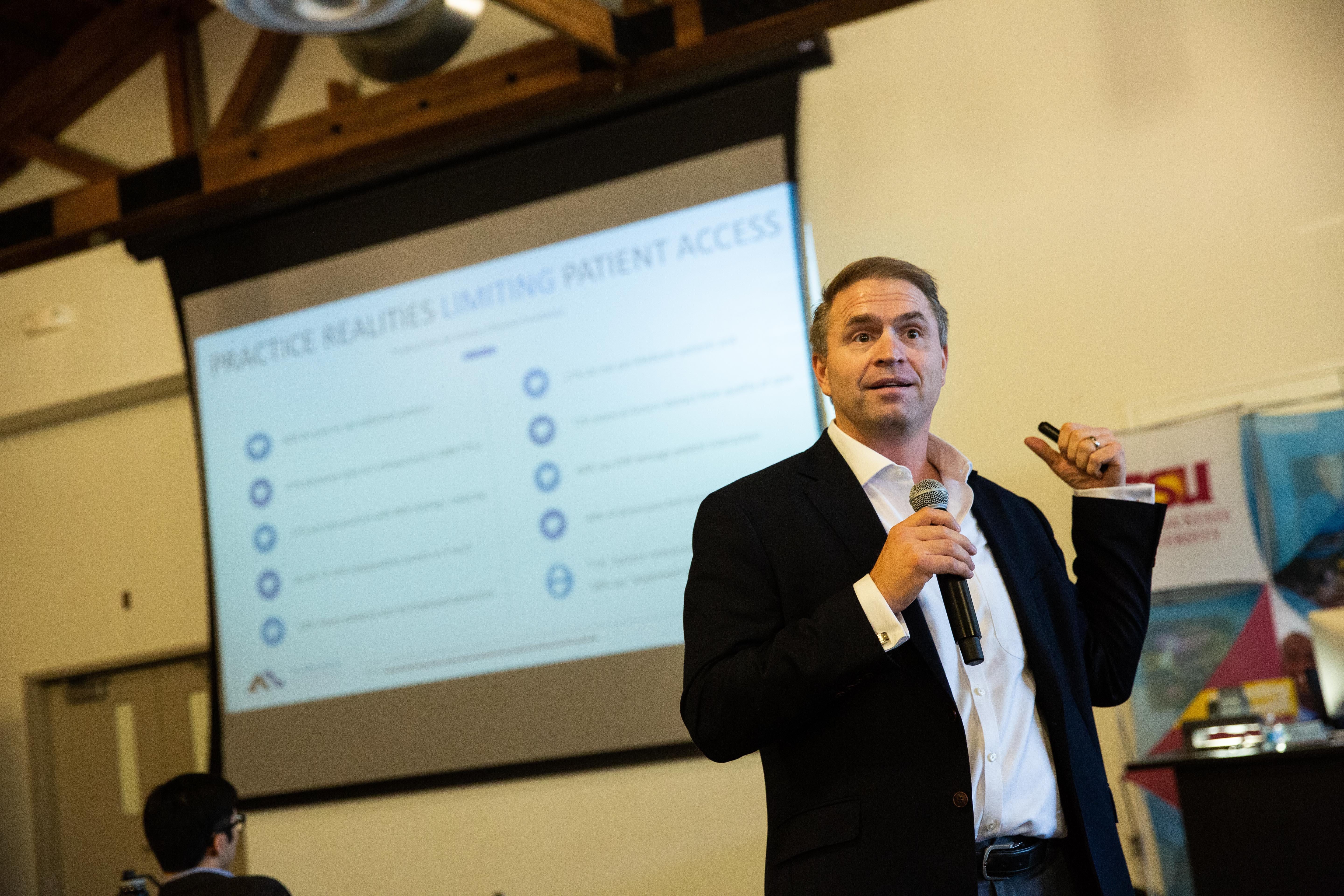 Also present Friday were a handful of ASU Prep Digital students, invited to the event to test the waters of a future in health care.

Eleventh-grader Naije Cook is considering a career in neurology and was fascinated by all she learned.

“I always heard ASU was number one in innovation and wanted to know what was actually happening here,” she said. “This exposed me to a lot I wouldn’t have known about.” 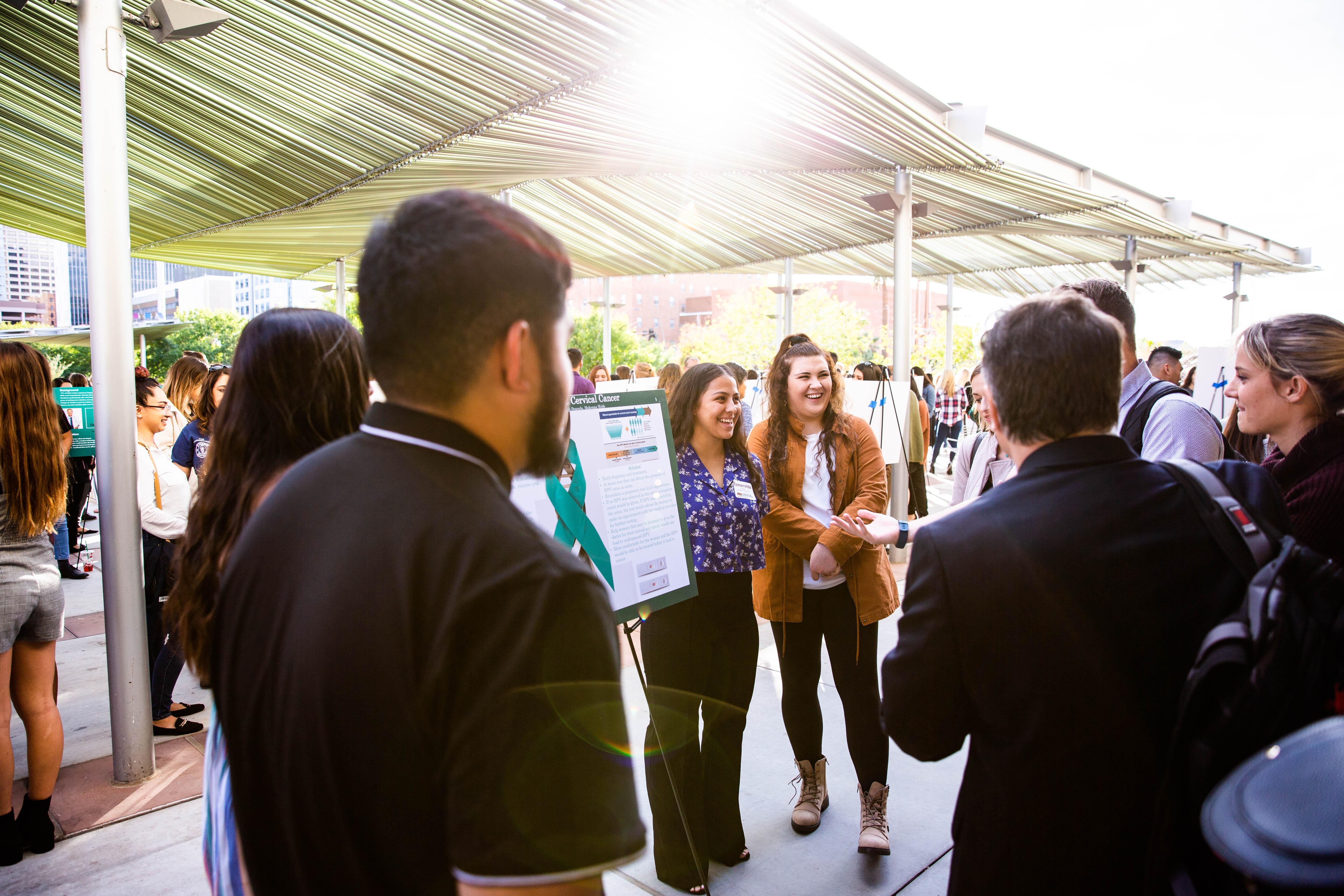 Usually, said CONHI Dean Judy Karshmer, students are told, “Here are the problems and here are the solutions.”

“We are asking them, ‘What is your answer to the problem?’ What a way to start your academic career.”

Event sponsors provided $1,750 in prize money that was awarded to the top three student teams, to be applied to startup costs to allow them to actualize their ideas in the HEALab.

The winning student teams are:

Third place: $250 for the KaMaCa Mat, a device that will allow easier access to yoga and meditation instructions to palliative care patients with a built-in monitor that shows users different exercises while monitoring heart rate and blood pressure.

Second place: $500 for the Fight Against Feminine Hygiene Poverty, a vending machine placed in areas with high homeless populations. Users receive a card that allows one free pass to a set number of feminine products per swipe. To offset the costs, people who do not carry a card can purchase their own feminine products at an affordable price.

First place: $1,000 for Inculpable, a traveling Broadway show that depicts sexual assault from the victim's perspective. Specialists of anti-sexual assault organizations will be part of the traveling show and available for the audience during intermission and afterward.

Top photo: Entrepreneur and ASU student John Hsu shares his experience in developing Introhm, a smart wearables technology, during the Hacking the Human conference and innovation expo at Arizona State University on Nov. 30, 2018. Entrepreneurs in the Phoenix area joined students, faculty researchers and industry experts to discover the latest in tech-driven solutions in health care. Photo by Deanna Dent/ASU Now